Rita Banerjee will introduce and lead the discussion for Vishal Bhardwaj’s 2014 film, Haider, on Tuesday November 3 from 6-8:30 pm for the Institute for Indology and Tibetology at Ludwig-Maximilians-Universität München, (Ludwigstr. 31, Seminarraum 427).  The screening is part of the course Translation and Modern South Asian Literatures at LMU.  Anyone interested in translation studies, Modern South Asian literature, or art house film is welcomed to join the screening.

“The Bollywood director Vishal Bhardwaj has made his name by adapting Shakespeare into film, using the plays to reflect the violence and vicissitudes of modern India. Maqbool, an adaptation of Macbeth, was set in the Mumbai underworld; Omkara transported Othello to the feudal badlands of northern India. His latest effort, a loose adaptation of Hamlet called Haider that takes place in Kashmir during the turbulent 1990s, has become one of the most acclaimed and contentious Bollywood movies of the year…[In the film] Haider is sent away by his parents to Aligarh, a university town in north India, to shelter him from the violence overtaking Kashmir. The movie’s plot is set in motion when he returns to his homeland to search for his father, who has been abducted by the military. Through Haider’s search, the movie plunges into a looking-glass world, where lies and deception are common, and the government has abandoned human rights and the rule of law to crush the armed insurgency.” – Vaibhav Vats, The New York Times

Rita Banerjee will introduce and lead the discussion for Ramesh Sippy’s 1975 film, Sholay, on Thursday July 16 from 6-8:30 pm for the Institute for Indology and Tibetology at Ludwig-Maximilians-Universität München.  The screening is part of the course Modernity and the South Asian Imaginaire at LMU.  Anyone interested in Modern South Asian literature, history, or art house film is welcomed to join the screening.

This 1975 film provides a superb look at popular Hindi cinema. Although it can be called an adventure, it has a spaghetti-western storyline, martial-arts sequences, comedy, soap-opera melodrama, and even musical numbers, including an early scene that has the two main characters riding a motorcycle and singing like Elvis Presley in the carnival flick, Roustabout. The film itself is indeed a carnival, and many of the features produced by India’s popular movie industry exhibit a similar mixture of ingredients in an attempt to meet the audience’s every possible expectation. Veeru (Dharmendra) and Jaidev (Amitabh Bachchan) are two small-time troublemakers who, in the past, have run afoul of Thakur Baldev Singh (Sanjeev Kumar); the Thakur, a former law officer, has seen the pair’s heroic nature despite their criminal ways. When a gang of bandits led by Gabbar Singh (Amjad Khan) murders the Thakur’s family and cuts off his arms, rendering him helpless rather than killing him, he enlists Veeru and Jaidev to help him seek revenge. In the Thakur’s rural village, the two bandits find romance and a hope for redemption and seek to free the village from Gabbar and his minions. The massive appeal in India of films like Sholay becomes evident; surprisingly, it succeeds in almost every genre it attempts to play. ~ Jonathan E. Laxamana, Rovi 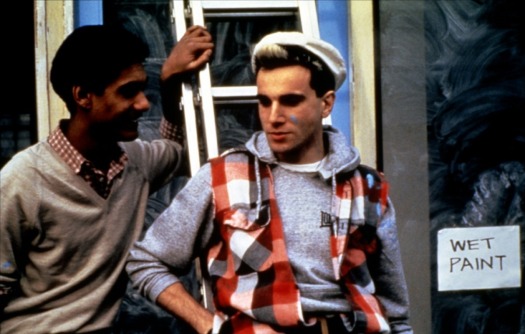 Rita Banerjee will introduce and lead the discussion for Stephen Frears’s 1985 film, My Beautiful Laundrette, on Thursday July 9 from 6-8:30 pm for the Institute for Indology and Tibetology at Ludwig-Maximilians-Universität München.  The screening is part of the course Modernity and the South Asian Imaginaire at LMU.  Anyone interested in Modern South Asian literature, history, or art house film is welcomed to join the screening.

My Beautiful Laundrette, written by Hanif Kureishi and directed by Stephen Frears, is the first real sleeper of 1985. The film is a rude, wise, vivid social comedy about Pakistani immigrants in London, , particularly about the initially naive, university-age Omar (Gordon Warnecke) and Omar’s extended family of wheeler-dealers and unassimilated layabouts.   ”Take my advice,” says Omar’s Uncle Nasser (Saeed Jaffrey) early in the film, ”there’s money in muck.” Omar heeds his uncle and enlists the aid of Johnny (Daniel Day Lewis), a Cockney mate from his school days. Together, Omar and Johnny set out to revitalize ”Churchill’s,” a failing laundromat, owned by Nasser, in a seedy section of London where enthusiastic, hustling immigrants are at odds with alienated, disenfranchised natives. Like the film itself, the relationship between Omar and Johnny is not quite as simple as it initially seems. Both men are outsiders. In the years since he and Omar were first friends, Johnny has drifted from one jobless limbo to the next. When Omar meets him again, Johnny is affecting a punk haircut and, with his pals, bashing Pakistanis, mostly because there’s nothing better to do.   It gradually becomes clear why Johnny has agreed to give up his street life to join Omar, who, being a Pakistani, isn’t easily explained to his Cockney pals. Johnny is bored with his own aimlessness. He never quite admits it, but he’d like to get ahead in the world. Further, and most important, he’s in love with Omar, something that Omar responds to and, like the hustler he’s becoming, uses to his own advantage. ~ Vincent Canby, The New York Times.

Rita Banerjee will introduce and lead the discussion for Satyajit Ray’s 1967 film, The Zoo (Ciṛiẏākhānā, চিড়িয়াখানা), on Tuesday June 16 from 6-8:30 pm for the Institute for Indology and Tibetology at Ludwig-Maximilians-Universität München.  The screening will take place in Seminar Room 427 (Ludwigstr. 31, Munich).  The screening is part of the course Modernity and the South Asian Imaginaire at LMU.  Anyone interested in Modern South Asian literature, history, or art house film is welcomed to join the screening.  Satyajit Ray’s Ciṛiẏākhānā (The Zoo) is a detective film based on the famous crime novel of the same name by Saradindu Bandopadhyay. It features the detective Byomkesh Bakshi, and the zoo in question isn’t literally a zoo; just a flower-cum-dairy-cum-poultry farm called Golap Colony, which is inhabited by a very odd assortment of outsiders and outcasts. The founder of Golap Colony is Nishanath Sen (Sushil Majumdar), a judge who retired 10 years earlier at the age of 47, after being told by his doctor that his high blood pressure could drive him into an early grave. On a rainy day, with trams going by in the street below, Mr Sen comes to visit Byomkesh Bakshi (Uttam Kumar) at his flat. The room where he’s received is crowded with symbols of Byomkesh’s eclectic interests: a skeleton, a baby python, books, a cluttered desk with a soft board above it on which are pinned various phrases written in Bengali and English. Also, staying with Byomkesh at present is his friend and chronicler (“Your Dr Watson?” says Mr Sen), Ajit (Shailen Mukherjee). Mr Sen, having introduced himself and told Byomkesh about Golap Colony, gives a hint of why he’s come. Mysterious incidences have been happening at the Golap colony which Mr. Sen wants the famed detective Byomkesh Bakshi and his assistant Ajit to solve. But Mr. Sen is troubled by another, stranger problem: there’s an old Bengali movie song, Bhalobashar tumi ki jaano (“What do you know of love?”) that haunts him, as does the disappearance of the actress who originally sang it. – Madhulika Liddle

Rita Banerjee will introduce and lead the discussion for Richard Attenborough’s 1982 film, Gandhi, on Tuesday, May 5 from 6-8:30 pm for the Institute for Indology and Tibetology at Ludwig-Maximilians-Universität München.  The screening will take place in Seminar Room 427 (Ludwigstr. 31, Munich).  The screening is part of the course Modernity and the South Asian Imaginaire at LMU.  Anyone interested in Modern South Asian literature, history, or art house film is welcomed to join the screening.  “Richard Attenborough’s Gandhi (1982) is the story of a complex man, a wise and wily politician who maneuvered India to independence from imperial Britain while living the nonviolent, austere, communal life that was his impossible vision for all Indian society. It is a film that moves chronologically, episodically, from an unknown young barrister’s catalytic collision with racial and cultural bigotry in turn-of-thecentury South Africa to the 1948 assassination in a Delhi garden of the man the world had come to know as the Mahatma – the ‘Great Soul.’” – Barbara Crossette, The New York Times 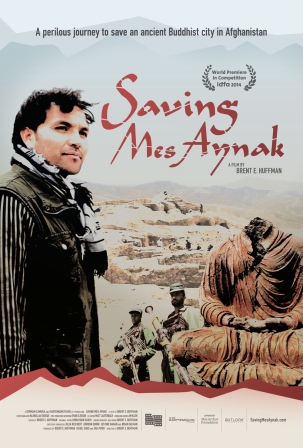 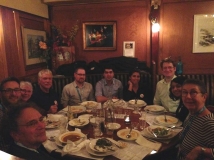 In late November 2014, my partner and I had the opportunity to attend and participate in the world premiere of Brent E. Huffman’s documentary film, Saving Mes Aynak.  About a year and a half ago, we had screened an early version of Huffman’s film as part of a larger discussion on Buddhist manuscripts and archeological sites at our Institute for Indology and Tibetology at Ludwig-Maxilimans Universität in Munich.  Saving Mes Aynak premiered in the Amsterdam at the Dutch IDFA festival, and the film “follows the Afghan archaeologist Qadir Temori as he races against time to save a 5,000-year-old archaeological site in Afghanistan from imminent demolition. A Chinese state-owned mining company is closing in on the ancient site, eager to harvest $100 billion dollars worth of copper buried directly beneath the archaeological ruins. Only 10% of Mes Aynak has been excavated, though, and some believe future discoveries at the site have the potential to redefine the history of Afghanistan and the history of Buddhism itself” (Huffman).  Mes Aynak played a significant role on the Silk Road and current houses one of the oldest surviving Buddhist sites in Afghanistan.  The Buddhist monasteries and historical forts on Mes Aynak are threatened by a Chinese mining company which plans to dynamite and destroy Mes Aynak in Spring 2015.  Not only then is this historical site and its rare and ancient artifacts at stake, but the area surrounding Mes Aynak and the livelihoods of the villages, drinking water, and ecosystem surrounding the site threatens to be destroyed by mining at Mes Aynak.  To prevent the destruction of the ancient sites at Mes Aynak and the environmental damage the mining would cause, please sign this petition.  To help spread the word on Mes Aynak, request to screen Brent E. Huffman’s Saving Mes Aynak here. – Rita Banerjee