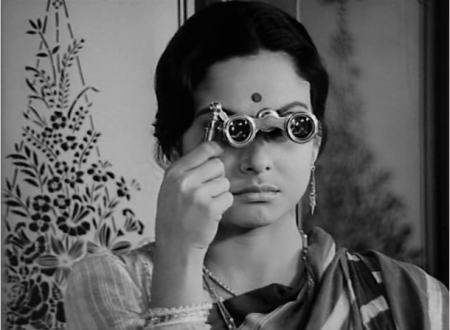 Rita Banerjee will introduce and lead the discussion for Satyajit Ray’s 1964 film, Charulata, on Tuesday November 17 from 6-8:30 pm for the Institute for Indology and Tibetology at Ludwig-Maximilians-Universität München, (Ludwigstr. 31, Seminarraum 427).  The screening is part of the course Translation and Modern South Asian Literatures at LMU.  Anyone interested in translation studies, Modern South Asian literature, or art house film is welcomed to join the screening.

“Satyajit Ray’s film Charulata, based on Rabindranath Tagore’s story The Broken Nest, is 50 years old, but it’s just so extraordinarily vivid and fresh. While watching this – in fact any of his films – the same question recurs: why aren’t we talking about Ray more? Or, in fact, all the time? There is such miraculous clarity here, such great acting, staged with theatrical aplomb and shot with unshowy genius. It has the effortless fluency and gaiety of a Shakespearean comedy. The setting is Calcutta in British India: Charulata, played by the hypnotically beautiful Madhabi Mukherjee, is the bored, cultured wife of a newspaper editor and proprietor who prides himself on being a bold free-thinker. His charming young wastrel cousin, a would-be writer called Amal (Soumitra Chatterjee), comes to stay and Amal and Charulata take an interest in each other’s literary aspirations – as well as in each other generally. The delicate pathos and subtle comedy of their romance is a joy, and there is wonderful audacity in the way Ray shows Charulata’s life at the beginning – simply looking out of the window, studying the passersby with the engaged curiosity of a true artist. Ray’s own artistry and poise emerges very strongly. This film is a tonic – a vitamin boost for the mind and heart.” – Peter Bradshaw, The Guardian