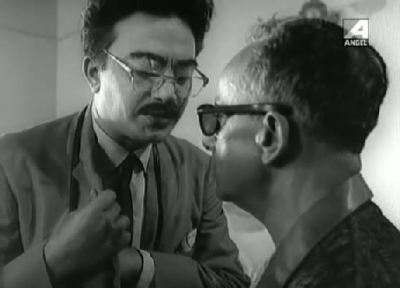 Rita Banerjee will introduce and lead the discussion for Satyajit Ray’s 1967 film, The Zoo (Ciṛiẏākhānā, চিড়িয়াখানা), on Tuesday June 16 from 6-8:30 pm for the Institute for Indology and Tibetology at Ludwig-Maximilians-Universität München.  The screening will take place in Seminar Room 427 (Ludwigstr. 31, Munich).  The screening is part of the course Modernity and the South Asian Imaginaire at LMU.  Anyone interested in Modern South Asian literature, history, or art house film is welcomed to join the screening.  Satyajit Ray’s Ciṛiẏākhānā (The Zoo) is a detective film based on the famous crime novel of the same name by Saradindu Bandopadhyay. It features the detective Byomkesh Bakshi, and the zoo in question isn’t literally a zoo; just a flower-cum-dairy-cum-poultry farm called Golap Colony, which is inhabited by a very odd assortment of outsiders and outcasts. The founder of Golap Colony is Nishanath Sen (Sushil Majumdar), a judge who retired 10 years earlier at the age of 47, after being told by his doctor that his high blood pressure could drive him into an early grave. On a rainy day, with trams going by in the street below, Mr Sen comes to visit Byomkesh Bakshi (Uttam Kumar) at his flat. The room where he’s received is crowded with symbols of Byomkesh’s eclectic interests: a skeleton, a baby python, books, a cluttered desk with a soft board above it on which are pinned various phrases written in Bengali and English. Also, staying with Byomkesh at present is his friend and chronicler (“Your Dr Watson?” says Mr Sen), Ajit (Shailen Mukherjee). Mr Sen, having introduced himself and told Byomkesh about Golap Colony, gives a hint of why he’s come. Mysterious incidences have been happening at the Golap colony which Mr. Sen wants the famed detective Byomkesh Bakshi and his assistant Ajit to solve. But Mr. Sen is troubled by another, stranger problem: there’s an old Bengali movie song, Bhalobashar tumi ki jaano (“What do you know of love?”) that haunts him, as does the disappearance of the actress who originally sang it. – Madhulika Liddle