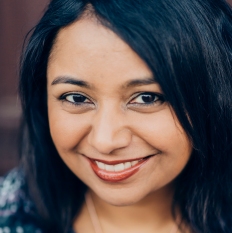 Rita Banerjee is an Assistant Professor of Creative Writing at the George Polk School of Communications at Long Island University Brooklyn, the editor of CREDO: An Anthology of Manifestos and Sourcebook for Creative Writing (C&R Press), and the author of the poetry collection Echo in Four Beats (Finishing Line Press), which was nominated for the 2019 Lenore Marshall Poetry Prize at the Academy of American Poets, named one of Book Riot’s “Must-Read Poetic Voices of Split This Rock 2018”, and was selected by Finishing Line Press as their 2018 nominee for the National Book Award in Poetry.  Banerjee is also the author of the novella “A Night with Kali” in Approaching Footsteps (Spider Road Press), and the poetry chapbook Cracklers at Night (Finishing Line Press).  She is the co-writer and co-director of Burning Down the Louvre (2022), a documentary film about race, intimacy, and tribalism in the United States and in France.

In 2008, she co-founded the Cambridge Writers’ Workshop at Harvard University with Diana Norma Szokolyai and serves as its Executive Creative Director.  She is an Associate Scholar of Comparative Literature at Harvard University, and an Editor-at-Large of the South Asian Avant-Garde.  She is currently working on a novel, a book on South Asian literary modernisms, and a memoir and manifesto about how young women of color keep their cool against social, sexual, and economic pressure.  Her writing is represented by agents Jeff Kleinman and Jamie Chambliss of Folio Literary Management.