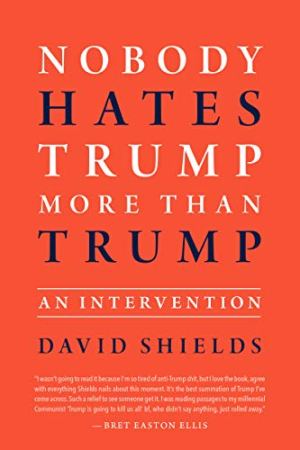 The Nervous Breakdown recently published a conversation between David Shields and Rita Banerjee on Shields’s book Nobody Hates Trump More Than Trump.  During their discussion, David and Rita unpack Trump’s complicated family and personal psychology, what makes the president tick, Trump’s relationship with Jeffrey Epstein, & how to disrupt Trump this fall!  Take a listen to their live recorded interview on The Nervous Breakcast.  A selection of the written interview follows below:

Rita:    You quote several of Trump’s tweets, interviews, off-air conversations, and “witticisms” throughout the book. What was it like to allow Donald Trump’s ethos, his words, his violence, his misogyny, his racism, and his nonsense to inhabit your body and your psyche, as you’re writing this book? Do his words become part of how one could maybe reason or rationalize him?

David:    I certainly worry about that… It’s a book I wrote a couple of years ago, and now it’s a year and a half later. I’d write the book differently now, though I’m proud of it, and I think it holds up well. Any other approach seemed, to me, dead on arrival. To me, standing on a high moral promontory and wagging a finger at the  armies down below is not an approach that interests me. You’re just preaching to the proverbial choir. That doesn’t interest me;it has no animating energy for me as a writer and thinker. A politically left friend of mine was telling me about how he watched the news. He happens to be in a wheelchair, and he couldn’t get to the remote on his TV. When Hillary was talking, he knew what Hillary was going to say and so he didn’t bother to wheel over to the remote because her words were so predictable and so vetted that he didn’t really care what she was saying. Instead, he found himself wheeling over to hear what Trump had said. That is what I wanted to unpack. If I find myself weirdly riveted by Trump, then I can try to understand those 50,000,000 voters who actually voted for Trump. Regarding your question, maybe the book will get us into uncomfortable territory. Trump does have quite serious performative skills. He’s basically an old-fashioned Catskills insult comedian, and for a variety of reasons, it works or has worked so far. There’s this quote I love by Ralph Waldo Emerson: “The way to write is to throw your body at the target when all your arrows are spent.” I tried to do that, to throw my body at the target, which is Trump. I was boring everybody with my “Oh my God, can you believe what’s happening?” But in this book I say, what’s scarily riveting about him? In this journal, I’m going to be real. For decades, Republican strategists have learned to go to the very essence of someone’s strength. You go after the unassailable, and the whole edifice falls down. Trump went after McCain, who was this canonized figure, and just said “I like heroes who aren’t captured.” That’s verbally brilliant. On every level, that’s politics, that’s warfare. There’s this line that I quote, too, from Seneca: “Life is warfare.” Trump gets that. Like I say in the book, quoting a friend, the Democrats are playing badminton and Trump is playing ice hockey. It ain’t working. So how about if in this book, I try and play some ice hockey?

Rita:    Follow-up question–throughout the book we get a portrait of Trump’s interior psychology. What is his relationship to emotion, and do you see echoes of Trump’s relationship to his emotion within yourself, or within American culture at large?

David:    I think that’s one of the huge hidden topics of the book. I do talk a lot about that: we’re numb,  we’re broken, in a postmodern, hyper-mediated, and hyper-digitalized culture. In contemporary, culture, we’re walking dead people. It’s my own thesis, and again I can only speak from my experience. Maybe this is my condition, which I’m unfairly projecting onto the populace. But all these 19th century feelings that Hilary Clinton pretends that we still have, people just know that’s completely dead. In some ways, Trump is a very contemporary person, probably because he has Attention Deficit Disorder and might be on the  spectrum.. I think he is in touch with his reptilian self, and he knows how to access it. Yes, he is a racist and has been from a very early age (stemming from his father’s real estate dealings), but what Trump does quite consciously is extend his personality to reach a larger base. Not long ago, he was a pro-business, pro-choice, pro-gay, centrist Republican. He’s taken his incipient racism and performs it extensively to see how far it can go. If it’s slightly too far, he just dials it back slightly. It has to do with art, with understanding that politics is performance art. It’s theater, it’s symbolic theater. When the Democrats are droning on about something, it’s not working. Part of my argument about art is that it does go forward. Art, like science, progresses; you can’t rewind the clock. Additionally, this kind of demagoguery seems to play better on the right. If someone like Elizabeth Warren started acting very demagogice, we would say, “Stop that.” “The left tends to valorize discourse and intellection, and demagoguery tends to be a strategy of the right. The left is now confused because how you can have riveting political theater when the whole rhetoric of the left is that they’re smarter than you, or they’re more thoughtful, more empathetic? I do think a real key to Trump’s success is that I think he’s a really quite serious nihilist. Through a lot of the lines in the book, he sounds like he’s straight out of “Notes from Underground,” Dostoevsky’s novella about the underground man. Trump has no belief in any transcendental signifier. He has no belief in love and religion, in art, in history, in the continuation of culture. He’s obsessed with the fact of death, he’s terrified of death, as most people are, but most people find some kind of solace or consolation. Trump is a seriously nowhere man. I would argue we all, as 21st century people, struggle with a kind of numbness. In Leaving the Atocha Station, Ben Lerner talks about being in a museum in Madrid and how the only thing that moves him about being in a museum is that he’s moved by his own incapacity to feel anything. I think that’s a real insight into contemporary culture. You may not agree; t might be the super male or white or privileged point of view, but that’s Trump’s point of view as well. I think his numbness is absolutely crucial. People will do anything to feel a little bit of rage about their numbness. Hillary is an easy battering ram or a punching bag because she’s such an obvious perfect foil for Trump. She’s earnest in the way that he’s cynical. You think of the great anti-heroes of literature, whether it’s Petronius’ Satyricon all the way up to Camus’s The Fall, and that character is our worst self realized. We see a reflection of our own numbness in Trump, and I think that connects to Trump’s rage. He’s expressing the rage that people feel, that life is absolutely meaningless in a post-God, post-literate culture. That is absolute political theater. That’s how I mean the Democrats are playing badminton: “Here’s our policy suggestion which might improve things ever so slightly.” Trump is not playing that game, he’s playing existential theater. And it has sort of worked so far. That’s really the core of the book, that we’re broken, we’re dead, we’re numb, we’re the walking dead. Watch me at least express an insane rage, which feels better than feeling numb.

You can read the whole conversation on The Nervous Breakdown here.