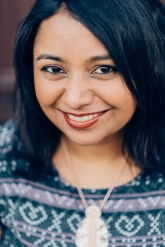 Rita Banerjee is the Director of the MFA in Writing & Publishing program at the Vermont College of Fine Arts.  As a writer, she is the co-editor (with Diana Norma Szokolyai) of CREDO: An Anthology of Manifestos and Sourcebook for Creative Writing (C&R Press, May 2018), and the author of the poetry collection Echo in Four Beats (Finishing Line Press, March 2018), which was named one of Book Riot’s “Must-Read Poetic Voices of Split This Rock 2018”, was nominated for the 2018 Kate Tufts Discovery Award, and was selected by Finishing Line Press as their 2018 nominee for the National Book Award in Poetry.  Banerjee is also the author of the novella “A Night with Kali” in Approaching Footsteps (Spider Road Press, 2016), and the poetry chapbook Cracklers at Night (Finishing Line Press, 2010).  As a filmmaker, she is the co-writer and co-director (with David Shields) of Burning Down the Louvre (April 2019), a documentary film about race, intimacy, and tribalism in the United States and in France.  Her work appears in Poets & Writers, Nat. Brut., Hunger Mountain, and elsewhere.  Her writing is represented by literary agents Jeff Kleinman and Jamie Chambliss of Folio Literary Management.