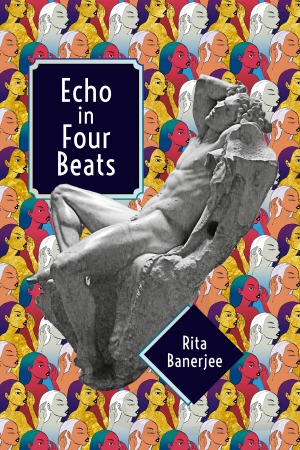 For every moving shade,
there was a jewel,
a bunt cake,
tea with honey,
rubies, too,
found them dead in a village
near the Ganges,
in some bastard king’s chest

(from “Pygmalion & the Slippers”)

At its core, the Echo in Four Beats is about Ovid’s myth of Echo and Narcissus, which serves as a fitting allegory for poetry in general, but also the landscape previously-described. A dualism within the speakers of these poems is a dualism of acceptance and rejection, of sequences of flight and iterations of home…

We were like that—lanterns in the midday sun,
laughter against a white-noise wind, tongues
circling salt-water stories, cliffs cocooned by the afternoon, cameras
catching harbor fish, reptiles, serpents, impossible possibilities–

Much of the experience where these transformations are derived, carried by the mythic allegories the poet’s subtle adaptations of ancient lessons, is tangibly encountered in place and culture. While the back cover of Echo in Four Beats contains a quote by Jaswinder Bolina describing the book as “post-national,” I believe the antithesis is far more obvious. This is a book collecting poems that encounters and elevates individual nations, individual cultural histories, and appreciates them through their intertwining. In the ways the otherness in Echo and Narcissus is an otherness of affection and difference, so too is the distinct origins of the spaces and roots presented in this book.

Read the full review of Echo in Four Beats on Yellow Rabbits here.