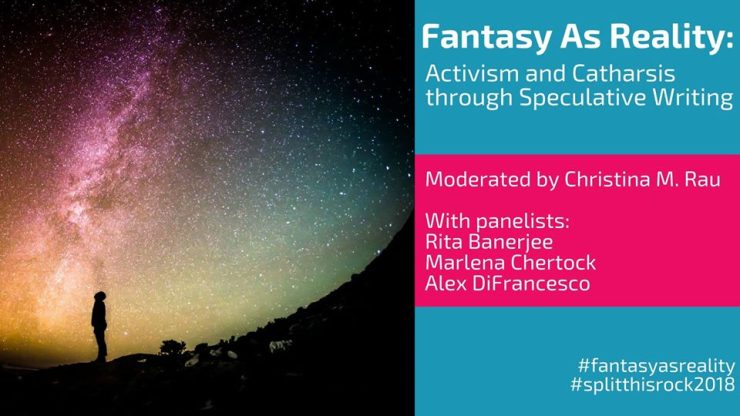 Poets Rita Banerjee, Christina M. Rau, Marlena Chertock, and Alex DiFrancesco will be featured in the panel “Fantasy As Reality: Activism and Catharsis Through Speculative Writing” at the 2018 Split This Rock Poetry Festival.  Split This Rock: Poems of Provocation & Witness will take place from April 19-21, 2018 in Washington, D.C.  You can read more about the festival here and the panel below:

Speculative literature, at its core, is about giving voice to “The Other.” Speculative writing, in prose or poetry, focuses on not only imagined realities of the future, past, and present, but also gives voice to bodies and individuals who are disabled, alien, marginalized, menial workers, and more. Terms like solarpunk and sco-speculation are becoming more used and explored. Often times, speculative and science fiction is stereotyped as futuristic, extraterrestrial, and fantastical romps through universes using space travel, time travel, and super-advanced technology involving mostly cis white males. However, women, non-binary, and activist writers of Speculative Fiction are purposefully  subverting this stereotype, diversifying and owning the fantastical worlds that they imagine. Sci-fi and fantasy characters and voices can and should represent the underrepresented to create a sense of community as well as rail against injustices in this world. 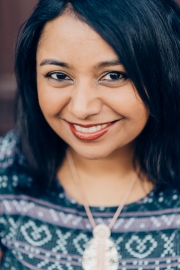 Rita Banerjee is the author of Echo in Four Beats (2018), CREDO: An Anthology of Manifestos and Sourcebook for Creative Writing (2018), the novella “A Night with Kali” in Approaching Footsteps (2016), and Cracklers at Night (2010). She earned her doctorate from Harvard, and she is the Executive Creative Director of the Cambridge Writers’ Workshop. Her writing appears in the Academy of American Poets, Poets & Writers, Nat. Brut., Painted Bride Quarterly, Hyphen Magazine, LARB, Electric Literature, and elsewhere. Follow her at ritabanerjee.com or @Rita_Banerjee 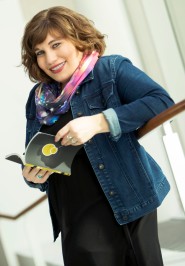 Marlena Chertock has two books of poetry, Crumb-sized (Unnamed Press, 2017) and On that one-way trip to Mars (Bottlecap Press, 2016). She lives in Washington, D.C. and uses her skeletal dysplasia and chronic pain as a bridge to scientific poetry. Her poems and short stories have appeared in Breath & Shadow, The Deaf Poets Society, Noble/Gas Quarterly, Paper Darts, Rogue Agent, Wordgathering, and more. Marlena often moderates or speaks on panels at literary conferences and festivals. She serves as the Communications Coordinator for the LGBTQ Writers Caucus. Find her on Twitter at @mchertock.

Christina M. Rau is the author of the sci-fi fem poetry collection, Liberating The Astronauts (Aqueduct Press, 2017), and the chapbooks WakeBreatheMove (Finishing Line Press, 2015) and For The Girls, I (Dancing Girl Press, 2014). Her poetry has also appeared on gallery walls in The Ekphrastic Poster Show, on car magnets for The Living Poetry Project, and in various literary journals both online and in print. She is the founder of the Long Island reading circuit, Poets In Nassau, and has read and run workshops for various community groups nationwide. She teaches English and Creative Writing at Nassau Community College where she also serves as Poetry Editor for The Nassau Review. In her non-writing life, she teaches yoga occasionally and line dances on other occasions.

Alex DiFrancesco is a writer, activist, and baker. Their first novel, The Devils That Have Come to Stay, is an acid western that deals with social justice histories of the California Gold Rush. Their current project is a climate-change fiction sci-fi novel set in a future New York City, and deals largely with socio-economic disparity and alternative utopias. Their work has appeared in The Washington Post, Tin House, Brevity, Longreads, The Heart Podcast, and more. They have recently relocated from New York City to rural Ohio, where they are still adjusting to things like “Sweetest Day.” They are currently an MFA candidate at a consortium program in Northeast Ohio.