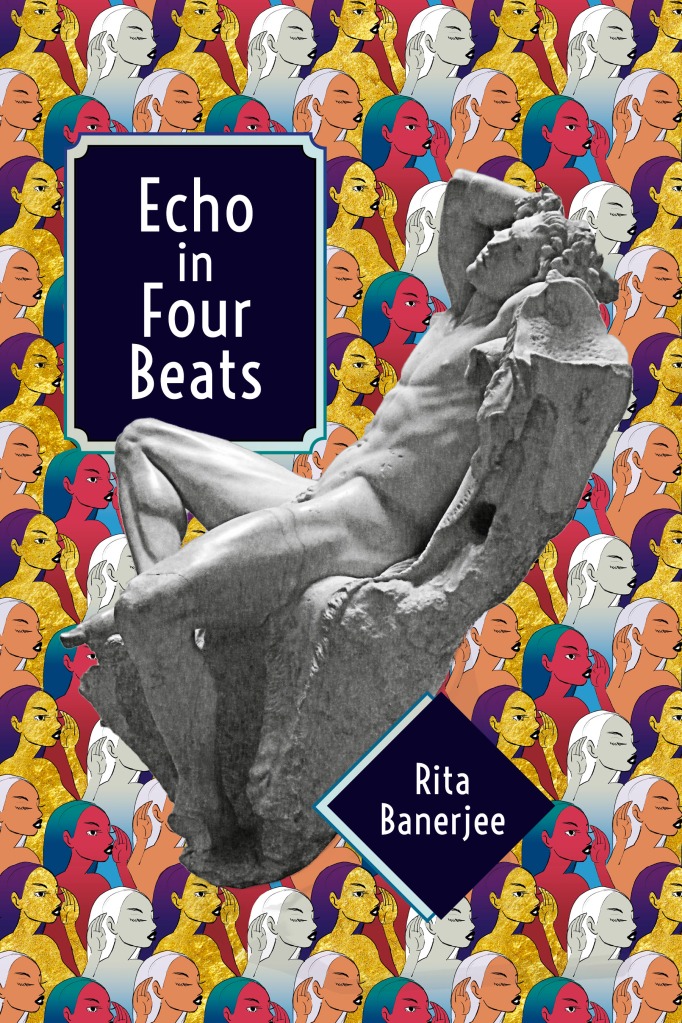 Combining elements, rhythms, and personas from American jazz, blues, and ragtime, poet Rita Banerjee presents a modern-day spin on the love story of Echo and Narcissus in her debut full-length poetry collection, Echo in Four Beats.  But in this story, told in four parts, Echo is more than just a fragment, she is a Sapphic voice that speaks, foretells, forestalls, and repeats.  Echo in Four Beats, which was a finalist for the Red Hen Press Benjamin Saltman Award, the Three Mile Harbor Book Prize, the Aquarius Press/Willow Books Literature Award, will be released by Finishing Line Press on February 2, 2018.

“Echo in Four Beats sounds the singular pulse of Harlem, Kyoto, Nainital and San Francisco to uncover a deeper mystery; what makes a word into a sensation, a sensation into a moment and what, in the swirling constellation of geographies, turns a moment into the sublime. Amidst the kinetic search for buried treasure in everyday encounters with photocopiers and the breathless search for lost objects, there are also unexpected collisions with silence so shocking, they stop us dead in our tracks. We realise the whiteness between words was here all along; its stillness curving the inside of this syncopated journey across time and space.”

— Dipika Guha, playwright and author of Mechanics of Love and The Rules, and screenwriter for American Gods

“Rita Banerjee’s Echo in Four Beats is a lyric wonder. Wildly intertextual and multilingual, Banerjee mines literatures, histories, and geographies, both eastern and western, to produce an expansive collection of poems. The breadth of her work is staggering and yet utterly approachable, at once intimate and worldly. This may well be the first truly post-national book of poems I’ve ever read. I look forward to reading it again and again.”

“Rita Banerjee’s Echo in Four Beats is a multilingual, intercontinental arpeggio of a journey on which ‘one layer/ of enchantment// dispels another.’ From Ovid to Baudelaire, from Manhattan to Atlantis to the Ganges, these poems conjure shape-shifting and gyroscopic worlds where erasure is sustenance, myth is religion, and home is but a constant state of momentary arrivals. Banerjee’s attentive, precise, incantatory poems reverberate ‘not sound not/ voice” and resound with the “enchantments of art/ and life.’”

— Tara Skurtu, author of The Amoeba Game and Skurtu, Romania

“In our narcissism-addled times, Rita Banerjee awakens Echo out of mythical slumber and accords her center stage, with stirring results. These poems dance nimbly from the playful to the sacred, the pentatonic-ancient to the jazzy-contemporary, the observational to the contemplative, and cross languages and borders with abandon, from trains in India to a Munich museum to the local copy shop. Yet while they may ‘change [their] temperament as quickly as salamanders change skin,’ Echo in Four Beats  is constantly returning us to a tonic center and rebuilding its chords and arpeggios anew, offering a music both savory and profound.”

“Banerjee’s polyglot collection–pushing at the edges of language; abounding with erasure, mistranslation and wit; impossible to contain in a single tongue. From the smallest pieces of our world–the falling snow, cobblestone, a reflection in the water–Banerjee has crafted something astonishing that reaches towards higher truths.”

— Stephen Aubrey, author of Daguerreotype and What I Took in My Handand Co-Artistic Director of The Assembly Theater, NYC