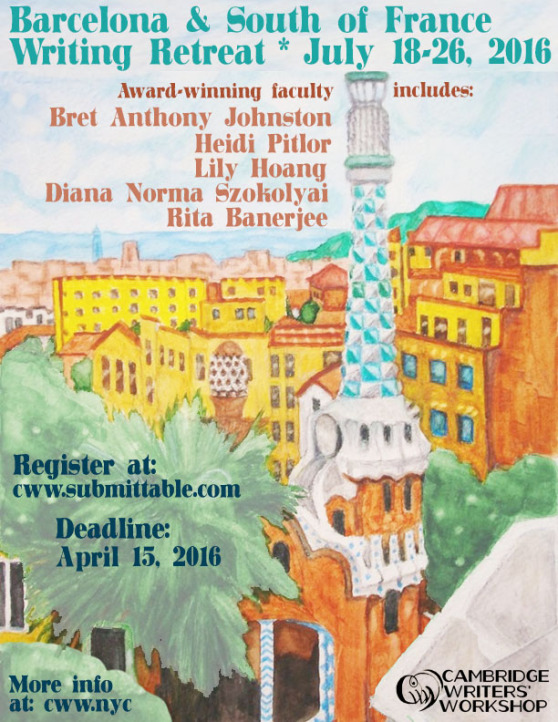 The Cambridge Writers’ Workshop Summer in Barcelona & Southern France Writing Retreat will take place from July 18-26, 2016.  The retreat will begin in Barcelona, Spain. There, you can engage in writing workshops while also taking in the Gaudi architecture, eating tapas, and enjoying the Spanish culture. After that, we’ll travel to Narbonne in the South of France. Located near the Mediterranean Sea, our writers will be able to enjoy the French summer and continue their writing projects in the picturesque town.  Faculty includes Bret Anthony Johnston(fiction), Heidi Pitlor (fiction, publishing), Lily Hoang (nonfiction, poetry), Diana Norma Szokolyai (poetry, nonfiction), and Rita Banerjee (poetry, fiction).  If you’d like to join us in Granada, please apply online at cww.submittable.com by April 15, 2015,  More info: cww.nyc

Bret Anthony Johnston is the author of the internationally best-selling novel Remember Me Like This, and author of  the award-winning Corpus Christi: Stories, which was named a Best Book of the Year by The Independent (London) and The Irish Times, and the editor of Naming the World and Other Exercises for the Creative Writer. His work appears in The Atlantic Monthly, Esquire, The Paris Review, Glimmer Train Stories, Virginia Quarterly Review, The Best American Short Stories, and elsewhere.  His awards include the Pushcart Prize, the Glasgow Prize for Emerging Writers, the Stephen Turner Award, the Cohen Prize, a James Michener Fellowship, the Kay Cattarulla Prize for short fiction, and many more. His nonfiction has appeared in The New York Times, the New York Times Magazine, The Wall Street Journal, Tin House, The Best American Sports Writing, and on NPR’s All Things Considered.  A graduate of the Iowa Writers’ Workshop, he’s the recipient of a National Endowment for the Arts Literature Fellowship and a 5 Under 35 honor from the National Book Foundation. He wrote the documentary film Waiting for Lightning, which was released in theaters around the world by Samuel Goldwyn Films. He teaches in the Bennington Writing Seminars and at Harvard University, where he is the Director of Creative Writing.

Heidi Pitlor received her B.A. from McGill University in Montreal and her M.F.A. in Creative Writing from Emerson College. She eventually became an editor and later a senior editor at Houghton Mifflin (now Houghton Mifflin Harcourt). She has been the series editor of The Best American Short Stories since 2007. Her writing has appeared in such publications as Ploughshares, The Huffington Post, and Labor Day: True Birth Stories by Today’s Best Women Writers.

Lily Hoang is the author of five books, including A Bestiary (winner of the inaugural Cleveland State University Poetry Center’s Nonfiction Contest) and Changing (recipient of a PEN Open Books Award). With Joshua Marie Wilkinson, she edited the anthology The Force of What’s Possible: Writers on Accessibility and the Avant-Garde. She is Director of the MFA program at New Mexico State University. She serves as Prose Editor at Puerto del Sol and Editor for Jaded Ibis Press.

Diana Norma Szkoloyai is author of the poetry books Roses in the Snow and Parallel Sparrows (Finishing Line Press). Her writing and hybrid art have appeared in Lyre Lyre, Dr. Hurley’s Snake Oil Cure, The Fiction Project, Teachers as Writers, Polarity, The Boston Globe, The Dudley Review, Up the Staircase, Area Zinc Art Magazine, Belltower & the Beach, and Human Rights News. Founding Literary Arts Director of Chagall Performance Art Collaborative and co-director of the Cambridge Writers’ Workshop, she holds an Ed.M from Harvard and an M.A. in French Literature from the University of Connecticut.

Rita Banerjee received her doctorate in Comparative Literature from Harvard and her MFA in Creative Writing from the University of Washington.  Her writing has been published or is forthcoming in The Rumpus, Los Angeles Review of Books, Electric Literature, VIDA: Women in Literary Arts, AWP WC&C Quarterly, Queen Mob’s Tea House, Riot Grrrl Magazine, Poets for Living Waters, The Monarch Review, The Fiction Project, Quail Bell Magazine, Jaggery, Catamaran, The Crab Creek Review, The Dudley Review, Objet d’Art, Amethyst Arsenic, Vox Populi, Dr. Hurley’s Snake-Oil Cure, Chrysanthemum, and on KBOO Radio’s APA Compass in Portland, Oregon.  Her first collection of poems, Cracklers at Night, was published by Finishing Line Press and received First Honorable Mention for Best Poetry Book of 2011-2012 at the Los Angeles Book Festival, and her novella, A Night with Kali, is forthcoming from Spider Road Press in 2016.  Creative Director of the Cambridge Writers’ Workshop, she is currently working on a novel and a book of lyric essays.