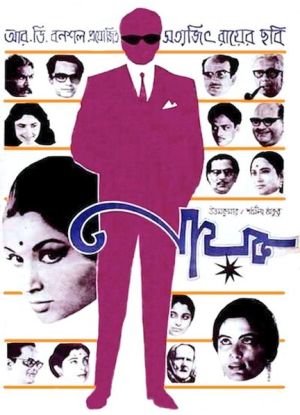 Rita Banerjee will introduce and lead the discussion for Satyajit Ray’s 1966 film, The Hero (নায়ক), on Tuesday October 28, 2014 from 6-8:30 pm for the Institute for Indology and Tibetology at Ludwig-Maximilians-Universität München.  The screening will take place in Seminar Room 427 (Ludwigstr. 31, Munich).  The screening is part of the course Bengali 3: Intermediate Bengali Language and Literature at LMU.  Anyone interested in Bengali Cinema or South Asian Art House Film is welcomed to join the screening.  In Satyajit Ray’s The Hero (Nāyak), a sharp-witted, serious young journalist finds herself stuck on a train with a movie superstar in Ray’s surprising examination of “intellectual” and “popular” cultures. Collisions are expected when the bespectacled intellectual (Sharmila Tagore) and the blustery movie star (Uttam Kumar, himself a Bengali matinee idol) wind up sharing tales and time on the train together, but soon the star finds himself revealing a surprising intelligence and self-doubt, as well as secrets from the past. And for the journalist, what begins as the hope of a star exposé turns into the glimpse of one man’s failures and dreams, as well as cinema’s (and fame’s) capability to destroy itself. Many believed the intellectual Ray was anticommercial or antipopular cinema, but The Hero offers a perceptive, empathetic look at that world’s dreams, hopes, and artistic dilemmas. Critic Albert Johnson described it best: it is “a realistic film about the unreality of dreams.” —Jason Sanders