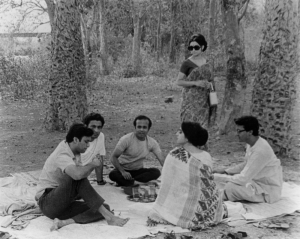 Rita Banerjee will introduce and lead the discussion for Satyajit Ray’s 1970 film, Days and Nights in the Forest (অরণ্যের দিনরাত্রি ), on Tuesday May 13, 2014 from 6-8:30 pm for the Institute for Indology and Tibetology at Ludwig-Maximilians-Universität München.  The screening will take place in Seminar Room 427 (Ludwigstr. 31, Munich).  The screening is part of the course Bengali 2: Introduction to the Bengali Language & Art House Film, II at LMU.  Anyone interested in Bengali Cinema or South Asian Art House Film is welcomed to join the screening.  Ray’s most overtly Renoir-ish film, this might almost be a remake of Une Partie de Campagne, transposed to another time and place and through another sensibility. Instead of the French bourgeois family setting off for a picnic, four young men leave Calcutta for a few days in the country, trailing their westernized careerist attitudes, a middle class indifference to the lower orders, a self-satisfaction that leaves them closed to experience. Out of a series of delightfully funny mishaps as the visitors eagerly try to pursue acquaintance with their two promisingly attractive neighbors, Ray gradually distills a magical world of absolute stasis: a shimmering summer’s day, a tranquil forest clearing, the two women strolling in a shady avenue, wistful yearnings as love and the need for love echo plangently. Elsewhere jobs have to be won or lost, problems faced and solved, but not here; an illusion of course, revealed as time lifts its suspension but leaves one of the quartet a changed man, the other three assailed by tiny waves of self-doubt. Beautifully shot and acted, it’s probably Ray’s masterpiece. – Time Out   [Days and Nights in the Forest is based on a story by Bengali modernist writer, Sunil Gangopadhyay]