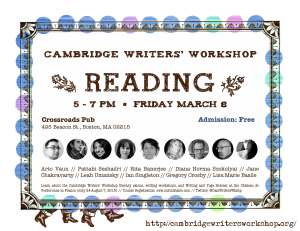 Featured readers include Rita Banerjee (author of Cracklers at Night (Finishing Line Press) and Co-Director of the Cambridge Writers’ Workshop), Diana Norma Szokolyai (author of Parallel Sparrows (Finishing Line Press) and co-director of the Cambridge Writers’ Workshop), Pattabi Seshadri (whose poetry has appeared in Cincinnati Review, American Letters and Commentary, & TYPO), Ian Singleton (whose short story collection, Cussing, is forthcoming and whose work has been published in Asymptote, Midwestern Gothic, and Ploughshares), Leah Umansky (who is a contributing writer for BOMB Magazine and The Rumpus, and author of Domestic Uncertainties (BlazeVOX Books)), Gregory Crosby (who is co-creator of the EARSHOT Reading Series and Co-Editor of Lyre Lyre), Arto Vaun (whose first book is Capillarity (Carcanet Press) and whose first album is coming out in March), Lisa Marie Basile (who is the editor of Patasola Press and the author of Triste (Dancing Girl Press) and war/lock (forthcoming from Hyacinth Girl Press)), and Jane Chakravarthy (whose work has been published in The Fox Chase Review and who is working on her next book False Legend and Awakenings).